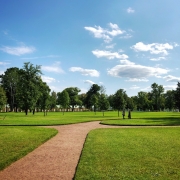 Nature appears to still be at her best.

She does not miss us humans.

The basketball and tennis courts cry at the silence,

They miss us humans.

People long to gather in groups, craving a touch or a smile,

Humans miss and crave one another .

The French have a phrase “charge mentale ménagère” which literally means, “household mental burden”. As COVID-19 develops its legacy and imprints itself upon all of us, we have to start questioning the impact that lockdown and furlough has had on our homelife. There is a strong risk that part of the workforce, and particularly women, may be getting thrown back to the cold war times. Of course, many households may say that that they are sharing the chores 50/50 or alternatively, that the other partner is furloughed so they should do the heavy lifting. I don’t believe this approach of allowing one person to take the burden of the household is particularly helpful at any time, and particularly not at a time of crisis like we’re experiencing now.

What we see, and what the French appear to have acknowledged for years, is that often one partner (usually the woman) has to plan the chores, the activities, and tends to be the main ‘go to’ person for everything from remembering birthdays to monitoring what’s going on on the local WhatsApp group. This leaves them with the mental burden of the running the household. In true reflection, this can mean carrying out 75% of the activity simply because they have to act as household and family project managers – and this is often in addition to their day job. One could even say that it reflects many large corporates – where the women often develop, organise, and deploy a project whilst a front person and team come in and take the credit. This is in itself on a level correct, but the mastermind behind the project is often not merely forgotten – because that would suggest they were acknowledged at some point – but simply not seen at all. This is because the project was seamlessly achieved, and the work is often done and always has been done; it is part of the everyday fabric. They become the “doers” but what businesses are overlooking to their detriment is that those who are doers at this level are also often simultaneously strategic planning, organising and more. The doing was a simple icing on the cake – the label of doer is therefore not fitting.

Businesses have form in overlooking women in a crisis – look at the 2008 financial crisis which had a disproportionate impact on women. The gender stereotype has been with us for years, and I would hope that we have moved on from such times as World War II where women had made progress in terms of employment, albeit out of necessity, only to then have that progress reversed. The issue was not just with the employers when the men returned from the war, but also men’s own viewpoint of how the household should be run. The division of labour at home was so ingrained within society it was unfathomable for them to think of staying at home or having the women not at home.

We have of course now moved on from this but how far have we really come? Are the men that have been furloughed feeling some form of resentment for having to take on more responsibility in the day to day household tasks? Or are the women who are left alone all day with the children feeling the resentment? No one has been left untouched by this epidemic. We are all suffering from the effects of the virus in some form. Research from Kings College of London found that women are suffering more in terms of feeling the pressure of work and keeping on top of home demands such as domestic chores and childcare. The issue of gender is also not the only on the table for employers, but also one to be addressed at home.

We are in the centre of a critical moment, on the cusp of turnaround and possible pivoting in terms of domestic life. . That which is so ingrained within our beliefs, unconscious bias and prejudices are slowly bubbling to the surface.

At times of great stress and crisis we begin to question and look for new ways of being. On a more micro level, we are having to find new ways of structuring our home lives. With grandparents no longer able to offer the childcare support so many families rely on, and schools and other childcare options still extremely limited, responsibilities and roles are having to be readjusted and redefined on an almost daily basis. Likewise, negotiations between employers and employees with caring responsibilities are requiring new levels of openness, creativity and understanding. Work and home life are now more intertwined than in generations.

Can the threads of our relationships remain intact and our opinions and perspectives change? Can we Stop and pivot to create a more balanced and inclusive working and home life that not only gets us through the crisis but endures and creates a better way of being in the future?